Unfortunately due to ongoing health concerns, and to make sure we’re doing our utmost to keep our staff, customers, and the artists that come through safe, we are going to reschedule the Cavetown in-store event until things get a little more back to normal, and Cavetown is able to reschedule his affected tour dates. In the meantime, Robin has signed a stack of posters for everyone who’s pre-ordered for this event and we should have them here when you come to get your Sleepyhead CDs and/or LPs on 3/27. We can also help with mailing, if needed. Watch our main page for more general in-store info, including additional pick-up and shipping options.

Stay tuned for updates, and feel free to call if you have questions. Thanks for supporting bands you love and stores like Fingerprints. 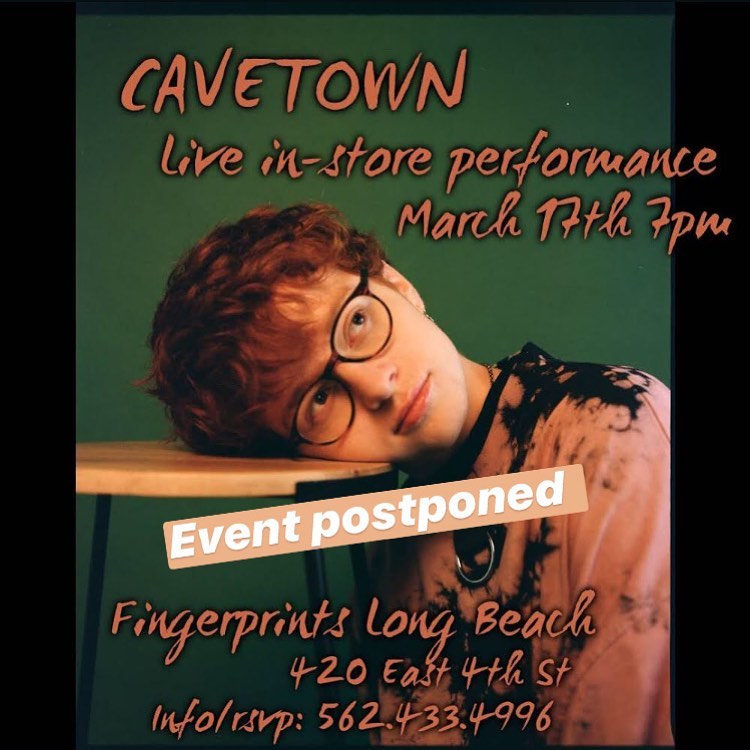 Sire Records recording artist Cavetown will be stopping in for a very special pre-release live in-store performance on Tuesday March 17th to celebrate the release of Sleepyhead (due out March 27th).

To join us for this very special evening with Cavetown just pre-order “Sleepyhead” out 3/27 by calling 562.433.4996 to get on the guest list. The first 150 pre-orders include a wristband for a special meet & greet.

Here’s a bit about Cavetown:

At only 21 years old, Skinner has built an incredible story since he started posting his ukulele-based songs on YouTube when he was 14.

From early covers, to originals, and now producing other artists, to reaching 25 million streams on Spotify, selling out venues as prestigious as LA’s Fonda Theatre, New York City’s Webster Hall and London’s Shepherd’s Bush Empire, to playing festivals like Reading & Leeds, Lollapalooza, & Shaky Knees; he has done it all with heartfelt slices of day-in-the-life, behind-the-scenes vignettes, and an openness that underlines his positivity, humor, and ability to put himself out there.